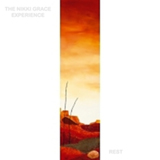 by
The Nikki Grace Experience

The Nikki Grace Experience combines a variety of influences, from classical, jazz and post-rock with the moods and soundscapes of dark ambient.

"The Album 'REST' was recorded and mastered by myself in my own Proclambient (means Progressive-Classical-Ambient) Studio at my Home in Germany. It was a process about one year, I put all my ideas together, first on piano (that's played by myself on a Midi keyboard). The speeches on "Broken Home" I took from a Creative Commons blog --it's a preacher who's talking and weeping about God and Jesus-- together it's my interpretation of a broken home that's left and leaving. All strings I used were formed from synthesizer tunes into real strings by myself. The dialogue on "Playback rewind..." are recorded in Dutch speech one year ago by myself; it's an old Woman which would not leave alone her old cassette player. Sad story I think, deep minded and terrible. "Easy Steps Moving Downward" is the newest one on this release. It's my own favorite, a little bit jazzy I think. It's a view to the next releases I'm working on. The drums are created by myself on a drum machine that I use for my computer, also Midi into real stuff. "Spaetrot" is a German word and means "the last Autumn light." It was the hardest song to work on - the speeches are an old couple (on it you can hear one of them, together you can hear it on the second Part I'm working on) who are talking about their time as teachers in the past, a remembrance which sounds like a last autumn light I think. It was taken from Creative Commons blog called Freesound. So "Rest" is putting all the sad stories together. It's a very personal song about my dead Father who died 26 Years ago, my inner peace to find him everywhere, sounds like a ghost story. It's the deepest Song for me on this release. I've worked on it 6 Months and made it by myself, Which was important for me." -- the artist

"The Nikki Grace Experience -- The Project was born in the year 2010. The Idea of the musical fusion rose from my novel Eta Carinae, existing since 2008. I try to put all dark and sinister images into musical landscapes and post-rockish and ambiental walls. My music is like a mirror, very different, sometimes strange, jazzy, classical, melancholical but always The Nikki Grace Experience. The full release called 'Rest' is the first full length I'll release. In two years I wrote tons of tracks and 'scapes. I think 'Rest' is now ready to go out. It's very experimental I think, all of The Nikki Grace Experience flows into 'Rest', from electronica spheres to rock parts. It's not a concept album; every song stands alone and for itself and flow into 'Rest'. I'm always inspired by journeys through my home, Germany, the Woods, the people, all strange things I see every day, and over there I'm inspired from other beautiful countries like Ireland, the northern countries, all this, with its breath of coldness but beautiful strangeness. I think Music must be a kind of Heart and Soul and the Heart of the Soul turns into Music." -- the artist

Note: This album was originally released with artist attributed as Eta Carinae, and has been retroactively renamed.